From The Archives: Gerry Thomas, Inventor of the TV Dinner 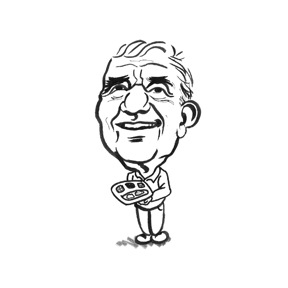 Gerry Thomas, the man who perfected the concept of putting dangerous amounts of fat, sodium and MSG into aluminum trays and freezing them so a generation of children could grow up insane in front of the television, died last month after finally tasting a Swanson Hungry Man dinner.

Witnesses say when doctors reached him, Thomas was warm on the outside, but still frozen solid in the middle.

Thomas’s original aluminum TV Dinner tray can now be seen in the Smithsonian Institution next to a diorama of the first domestic beating it caused.

In 1999 Thomas was honored for his invention when he was asked to press his hands and TV tray into the cement outside Grauman’s Chinese Theatre. Paramedics had to be called when Thomas mistook the lukewarm, half-congealed mixture for a pile of Swanson’s Potatoes & Beef Gravy.

The deceased requested his remains be crammed into a metal tray with the foil pealed back, and each organ sealed in a separate compartment to avoid mixing the liver gravy with his brain noodles.