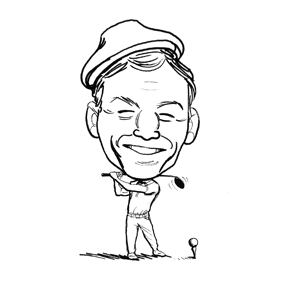 
Ben Hogan, considered the greatest golfer in the history of sports, is dead after suffering a massive pulmonary embolism, or the kind of stroke from which no golfer could ever recover.

Hogan first discovered golf during puberty when he hit two good balls after stepping on a rake.

Even after enduring countless jokes like that, Hogan remained dedicated to the sport. And during the succeeding years he often spent the days “noodling” with his “little putter” in order to cut a “hard wood.” For extra hilarity, please re-read that last sentence aloud while emphasizing the words in quotes.

He finally won his first tournament in 1938. But the winnings were slim back in the depression and all he received for his effort was a bowl of soup and a tumbleweed.

Hogan’s life was not without hardship. During his later years, he suffered from elephantiasis and had to carry his bag around in a wheelbarrow.

During his illustrious career, Hogan won 63 tournaments, including nine major championships. But perhaps his greatest accomplishment was making golf the second most tedious sport to watch on TV after bowling.

For those of you not familiar with golf, the object of the game is to propel a small ball around a lawn using as little physical exertion as possible while making foreign policy decisions prolonging the Vietnam War.

Hogan requested his mashie niblet be preserved in a jar of formaldehyde right next to his father’s mummified cleek..