John Barron, Inventor of The ATM 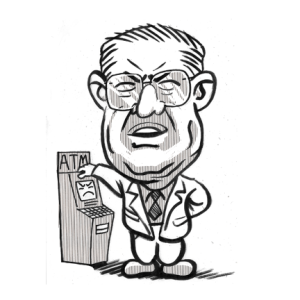 
John Barron, a Scotsman who over forty years ago invented the automated teller machine, is out of cash.

Witnesses say he died after an irate customer rammed a crowbar into his mouth-slot when he refused to dispense fifty dollars.

News of his death couldn’t be confirmed until four days after he was deposited at the morgue because the bank said they had to put a hold on his corpse.

Barron said he came up with the idea for ATMs after being locked out of his bank. He also said his invention was inspired by candy vending machines. Which begs the question: Which story is it, asshole?

In a recent interview, the 84 year-old Scottish inventor recalled how the original machines were so primitive, they only dispensed haggis.

Here’s an interesting factoid: the world’s highest ATM is located in Tibet at 5,000 meters.

The world’s lowest ATM is located 400 meters below sea level near the Dead Sea.

And the world’s stickiest is in Amsterdam. It is literally packed with semen.

Barron requested his body be dried and molded into a hard protective case containing four trays of twenty-dollar bills. Then placed near any dark area where people may gather to get robbed or kidnapped.