From The Archives: Rebecca Webb Carranza, Inventor of the Tortilla Chip 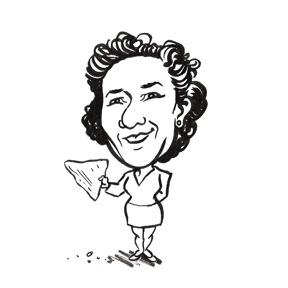 Rebecca Web Carranza, acknowledged creator of the first tortilla chip, died of a heart attack last month when she accidentally ate a priceless plate of nachos in the shape of the Virgin Mary.

Witnesses say her body was found cracked and soggy, lying face down in a half-eaten bowl of picante sauce surrounded by a bunch of teenage boys too shy to leave the snack table to go mingle with the girls standing by the keg.

Relatives say there’s no truth to the rumor she died after breaking her hip on an unusually heavy chunk of guacamole.

Carranza’s Los Angeles tortilla shop was the favorite of many celebrities. Eddie “Rochester” Anderson, who played Jack Benny’s valet on radio and television, would often buy a bag of her chips and then swallow them whole to create his horribly painful voice.

Carranza requested her remains be stored in an airtight, plastic bag for freshness, until the time comes when she must be covered with cheese under a heat lamp.