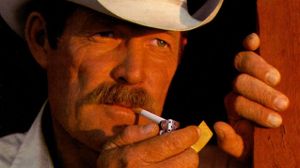 Darrell Winfield, one of the most recognizable Marlboro Men, primarily because he was the only one who lived long enough to get recognized, is dead after a prolonged illness that probably started 50 years ago.

Although he lived to the relatively old age of 85, doctors still caution that had he not smoked, he could have made it to 300.

Asked what life might have been like if he hadn’t become the Marlboro Man, Winfield answered plainly: Life would have basically been the same. But without all that money and pussy. And all those cars and the four houses. And all that pussy.

Friends described him as a “man’s man,” who just liked working on his ranch every day, lighting cigarettes and crouching a lot. And then of course there was all that pussy.

Winfield was so authentic, he often provided the cattle and horses that appeared in the commercials. They all have lung cancer now.

Winfield requested his remains be lit on fire with a burning twig and marketed to children.

One thought on “Darrell Winfield, Marlboro Man and Full-Flavored Smoke”