Barbara Bush: A Nation Mourns And Eats Its Lunch 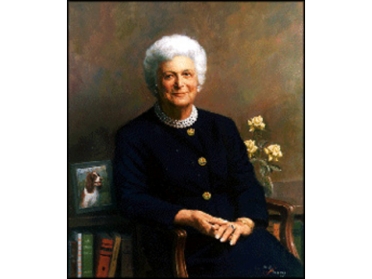 My fellow Americans: Major combat operations in Barbara Bush have ended.
In the Battle of Life, time and a beef-heavy diet have prevailed.

And now our coalition of Earth’s natural elements is engaged in securing and deconstructing her cell structure. The tyrant has fallen. And Kennebunkport, Maine, is now free from her brooding presence at Mabel’s Clam Shack.

As Jesus once said: “No one can escape the relentless grab-ass of death.” And so, Barbara (Pierce) Bush, a First Lady whose main claim to fame was allowing two war criminals in and out of her bat-filled sniz, is now playing host to more beneficial parasites.

Known for bravely facing her many illnesses, Mrs. Bush once remarked, ”I have no fear of death because I know there is a great god,” -a motto later adopted by ISIS.

Close friends eulogized her as a “national treasure whose glaring frown could really light up the room.”

Upon hearing the news, Barack Obama declared her ankles “Too Big to Fail” in between giving speeches to hedge fund managers. Then he remembered he wasn’t president anymore.

Miss Barbara Pierce first met George Herbert Walker Bush in college and soon after they married. She later said George was the first man she ever kissed without reading his lips about no new taxes.

In 1946 their union brought forth a healthy baby boy, George Jr., inspiring her immortal words: “Now I am become death, the destroyer of worlds.”

But it wasn’t until she became First Lady that she took the world by storm with her Bess Truman charm and relentless grudge keeping.

Indeed, Mrs. Bush’s casual, down-to-earth manner soon earned her the label of “America’s grandmother” from those in the Bush administration. It’s not clear who they considered “America’s grandfather,” but I’m thinking maybe Joseph Goebbels.

Bereaved family members are consoling themselves with the thought that the deceased is now up in heaven getting confused for the Quaker Oats guy.

The deceased requested her remains be interred in the family fetus jar.

BUY THE DISGUSTING BOOK AND HELP KEEP ME ALIVE:  https://www.createspace.com/3721076