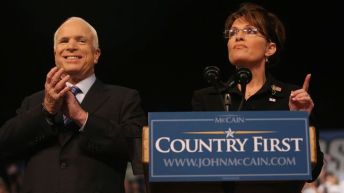 John McCain, the man who came close to giving Sarah Palin the presidency with one defective beat of his freeze-dried heart, just left a big, steaming bag of dog crap on America’s doorstep in the form of Donald Trump and the Tea Party.

A family spokesman said the deceased died surrounded by loved ones, 8 to 11 houses, and over 228 million Americans who can’t afford a $1,000 emergency.

Responding to the news with the predictable, gushy, effusive, sap-laden horse shit, both sides of the aisle praised the 35 years of public-service McCain spent courageously receiving the kind of medical care he fought so hard to deprive millions of desperate Americans.

When reached for comment, a bug-eyed Steve Schmidt was still breathing through his mouth and dropping his “T”s while Rachel Maddow teared up, bit her bottom lip, and tapped her pen for schmaltzy emphasis.

Sources say family members are consoling themselves with the thought that “John is now up in heaven where he can comfortably watch American troops spend an eternity in Iraq.”

A warrior to the end, McCain recently found the strength to thrust a final dagger into the dying Democratic party by telling Joe Biden to “stay in politics.”

Never one to shy away from criticizing his own party when it could make him look good, the straight talker had this to say about the Trump presidency: “I’m concerned about the state of the country.” You’d really think a war vet who unleashed Sarah Palin on the world might be more adept at anticipating danger.

A maverick himself, President Trump decided to cancel the tradition of flying the White House flag at half-staff after someone told him it wasn’t a tribute to the dead possum on his head.

Throughout his career, many critics labelled McCain a racist for backing white supremacist George Wallace Jr, supporting flying the Confederate flag, voting six times against divesting from South Africa’s apartheid regime, and pushing to rescind Martin Luther King Day. But at least he had enough respect for Asians to capitalize the word “gook.”

In a final nod to his celebrated Naval career, McCain requested he be allowed to crash his funeral five times.

McCain’s love for the Navy was so intense, he even reenlisted during his 2008 presidential campaign to serve on the USS Swift Boat.

Reflecting from his deathbed, the senator confessed his biggest regret in life was never weighing in on why DJ Khaled refuses to eat pussy.

After voting for the president’s agenda 83 percent of the time, the deceased ordered in characteristic mavericky manner that President Trump not be allowed to attend his funeral. To which a weary country sighed, “Like the Bush family’s better?”

Memorial services for the deceased will be announced once the undertaker can build the danged coffin!

At McCain’s request, the service will include a rendition of ’Danny Boy’ sung by opera singer Renee Fleming. This is to be followed by a short set from the remaining members of  “The Keating 5 Combo” with Sheldon Adelson taking Al Cranston’s place on drums, Hank Kissinger filling in for John Glenn on vibes, and Oleh Tyahnybok taking McCain’s place on percussion, hand claps and swastika.

McCain’s remains will lie in state in the Arizona Capitol before flip-flopping to the U.S. Capitol Rotunda and triangulating into a hole at the U.S. Naval Academy in Annapolis.

UPDATE:
Plans for Sarah Palin to deliver the eulogy had to be canceled after a nationwide search failed to find a translator.

BUY THE DISGUSTING BOOK AND HELP KEEP ME ALIVE:  https://www.createspace.com/3721076