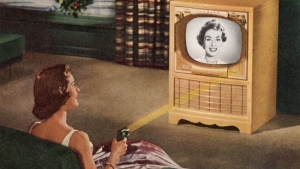 Eugene Polley, inventor of the wireless television remote control, is no longer in control of anything.

Small and frail, the elderly Polley alarmed family members late Tuesday night after getting lost in the couch. Medical examiners were quick to note dog-chew marks on Polley’s torso and a sticky film of hummus or something all over his face.

Invented in 1955, Polley’s Flash-Matic remote worked like a flashlight and was shaped like a snub-nosed revolver, something many Americans would later shove in their mouths after watching eight hours of shitty westerns.

Sadly, the 96 year-old died before he had a chance to finish his most important invention: a remote control for his diaper.

Polley’s family expect him to be buried sometime next week. That is, if anybody can get off their fat ass and stop watching TV long enough to do something.

Polley requested four photoelectric cells be implanted in his scrotum so when Jesus returns to earth, the light from his vengeful sword will activate the small electric motor at the base of his penis and change his tombstone to the Dumont network.

Danny Evins, founder of the Cracker Barrel restaurant, is now offering up his lowest priced meal to hungry travelers, this time in a pine box.

Evins named the Cracker Barrel after the practice of customers in Tennessee who gathered at country stores to gossip and play checkers on top of an empty barrel stuffed with dead civil rights workers.

After going public in 1981, the Cracker Barrel became a stock market darling with a certain investment sector. Unfortunately that sector dealt mainly with lap bands.

In 1991 Evins ordered all his restaurants to fire employees “whose sexual preferences fail to demonstrate normal heterosexual values.” Ironically, the directive coincided with the introduction of his most popular southern confection to date, the “Lingam Pecan Log,” a fluffy, cherry-laced phallocentric nougat wrapped in fresh caramel and latex.

Evins’ last request was that his brain matter be inserted into old-fashioned glass jars and sold to hungry truck drivers up and down Interstate 40. 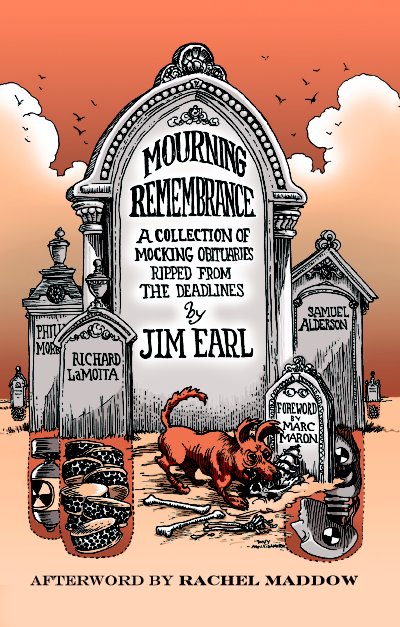 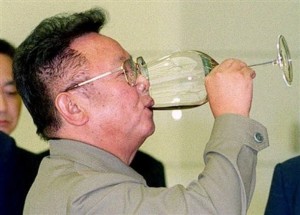 Korean leader Kim Jong-il, who for 17 agonizing years revealed to the world the true nature behind most foreign film buffs, is now wearing a brown jumpsuit of dirt.

Jong-il reportedly died of a heart attack on a train while traveling between two popular famine areas.

A recent psychological evaluation by researchers at the University of Colorado concluded that Kim Jong-il shared the same personality disorders as Hitler, Stalin, and most talk show hosts.

During his reign, Kim Jong-il ruled over his citizens with a doughy fist, and was often referred to as the “Supreme Leader,” “our Father,” “Generalissimo,” and his favorite, “Fard Farkle.”

As he was groomed for office in the early 1990s, radio broadcasts started referring to him as “Dear Father,” instead of “Dear Leader,” suggesting he was either getting a promotion, or the country just wanted to borrow money for a date.

After taking power in 1994, he continued his father’s brutal policies and devoted much of his country’s scarce resources to building the world’s fifth-largest bouffant.

Karl Slover, One of the Last Munchkins

Karl Slover, one of the last surviving munchkins from the film The Wizard of Oz, is now a friend of Dorothy’s undertaker.

Slover reportedly succumbed to a heart attack after he tripped on a bottle cap and fell into a cat bowl. The medical examiner listed the elderly Slover “dead at 93 -centimeters.”

When very young, he was diagnosed with pituitary dwarfism, meaning people were always going to ask him to explain Mickey Rooney.

Looking back, Slover always said it was important to live life to its half-fullest.

Never one to look down on an acting role, Slover once said, “There are no small parts, except on my body.”

Slover leaves behind a cigar box containing his bed.

Daniel Ruge, the man chosen to be Ronald Reagan’s White House physician during his first term as president, has died from a ruptured gipper.

Early in his career, Ruge practiced medicine with First Lady Nancy Reagan’s stepfather, who taught him the family secrets of pre-death facial embalming.

After the 1981 assassination attempt on Reagan, Ruge remained at Reagan’s side and nursed him back to health with the president’s favorite vegetable dish: Baked Catsup.

Ruge never stayed for the 2nd term. He was asked to leave in 1984 after he gave the president a battery of diagnostic tests which declared him brain dead.

Dr. Ruge requested his body be dug up every year, examined by doctors, and declared fit enough to serve public office.

From The Archives: Joseph L. Owades Inventor of Light Beer

Joseph L. Owades, the biochemist whose recipe for light beer achieved the impossible feat of making crappy beer even crappier, is now more stale than a Herman Cain pick-up line.

Fresh out of college, Owades got his first job researching for Fleischmann’s Yeast. Then he found out Fleischmann was one of his mom’s canasta friends and “Yeast” was another thing entirely.

In the 1950s he created the first “diet” beer by discovering an enzyme that destroys fat starches, and in the process, any reason for wanting to drink beer in the first place.

When Miller Brewing Co. bought his process they marketed the new beer with the familiar “tastes great, less filling” jingle, replacing the less successful “Hey! You gotta chug twice as much of this crap to get a buzz!” jingle.

Over the years Owades wrote over 40 research papers on beer, all of them supporting the same thesis that he’s okay to drive and nobody understands him.

Owades requested his body be brewed into a tasteless yellow liquid and poured directly into the toilet to save time.

William Irwin Wolff, M.D., originator of the modern colonoscopy procedure now practiced in well-ventilated clinics around the world, has finally seen the murky light at the end of the long, disgusting tunnel.

After graduating from New York University in 1936, Wolff spent years pioneering the field of colonic investigation. Then he became a doctor.

He was the first to develop a safe method for examining the full length of the colon without having to first unhook it from the family Slip N’ Slide.

As a result, the relatively unknown surgeon “exploded from behind” to become the “Number One” expert on where “Number Twos” come from.

A dedicated intestinal surgeon, Wolff was known for diving headfirst into each procedure, barely stopping even to catch a breath. Friends say there was no impediment that could keep him from getting his hands dirty.

As president of the New York Surgical Society, Wolff published more than 120 scientific papers. All of them double-ply.

Wolff was a gifted speaker, and his colonoscopy lectures would often leave the audience gripping their seats.

Wolff’s procedure inspired several technological advances, the most useful being a wire loop attached to the end of the endoscopic device that doctors now use to remove car keys.

Wollf’s last request was that his sons might continue his legacy taint-free. 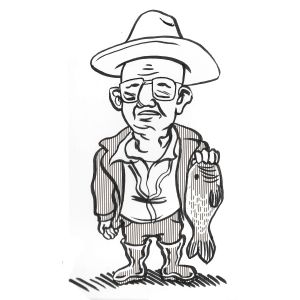 Elwood Perry, who in 1946 invented the Spoonplug fishing lure loved by millions of fishing enthusiasts, is now chum.

The 90 year-old Perry reportedly died while testing his latest invention, the “toaster-oven lure.”

On July 24, 1954 before dozens of witnesses, Perry used his Spoonplug 30 times to land 30 bass, setting a new world record. Not for fishing, but for holding the attention of dozens of people while doing something that boring.

One: Always drag a lure so it bounces off the bottom.

Two: Never, ever, ask Ned Beaty about that rape scene in “Deliverance.”

Perry requested his body be folded in two, impaled on a hook, and dragged along the bottom of a pond so fish could freely nibble on his jig wobbler. 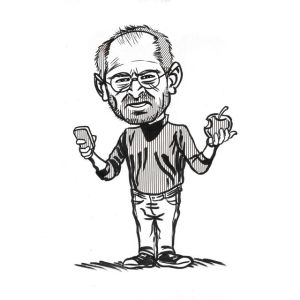 Steve Jobs, the computer pioneer who co-founded Apple and inspired people all over the world to think outside the box, is now stuck inside one.

Sources say just moments before his death, the ailing Jobs turned beige and dragged himself into the trash.

The news came as a shock to countless Apple fans, who still insist they’re not going to buy his death until a later version comes out.

Historians rate Jobs on a par with Thomas Edison. Mainly because they both loved to make silent movies of guys with big mustaches sneezing.

A true visionary, he was the first to see the real commercial potential behind the graphical user-interface. Especially when it was manufactured in Chinese sweat shops.

Among his many patents was the “Hockey-puck shaped mouse,” or as Chinese workers call it, “the only thing strong enough to snap my neck after securing the chord to an 8th floor railing so that I may leave this daily torture and finally taste the sweet relief that is death -mouse.”

Jobs recently fought hard for city planners to approve his new company headquarters built in the style of a spaceship. The hope was to attract non-union labor from Pluto who only eat discarded Zunes.

Jobs’ last wish was for Apple Police to search the surrounding neighborhood in order to find out which one of his employees accidentally took home his liver.

This obit was made on a Mac.