Don Fisher, Founder of The Gap 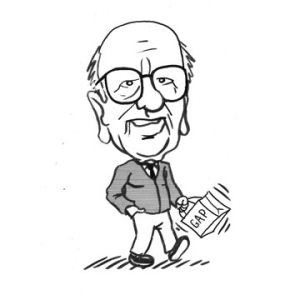 
Don Fisher, whose company’s slogan, “Fall into the Gap,” became synonymous with the dread most people feel when they realize there’s no other place in town to buy jeans, fell into another gap recently -this one 4 feet wide and 6 feet deep.

Doctors say Fisher died at his home in San Francisco after a long battle with taste.

Fisher opened the first Gap in 1969 with little more than a pocket full of gumption and an insatiable desire to measure the unspeakably scandalous distance between the bottom of a man’s cuff and the tip of his penis.

His stores soon caught on and became as commonplace as McDonald’s. Even so, you still couldn’t get cancer by eating one of Fisher’s pants.

An avid art collector, Mr. Fisher was known for his vast collection of paintings -now housed at the Museum of Modern Art in the “Sickening Pastels Wing.”

Fisher asked that his body be washed in cold water, cremated on low, and immediately removed from the oven to avoid wrinkling.